My Friend Paul,
The other day I heard Paul passed away,
You may have meet him if you visited Disneyland,
between 1961 and 1986...
Paul was Mickey Mouse!
I first meet him in 1964 in town square.
[I'm the one in the Duck hat]
and in the late 70s,
I got to know him when I joined the Character Dept.
I showed him this picture of us around that time
and he just laughed and said
"Well YOU grew up... look at me"
"Hee Hee, Hee Hee Hee" 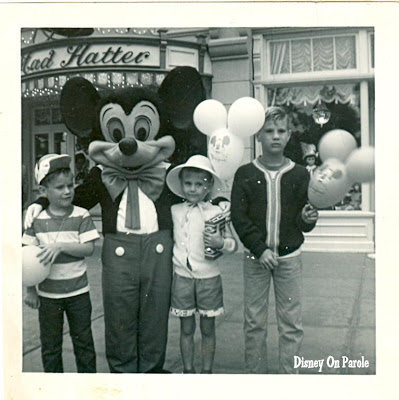 I'd like to tell you a little about Paul's career at Disneyland...

Before becoming Mickey,
Paul, along with his wife Alma,
were Professional Ice Skaters, Paul a Headliner, with Ice Capades!...
[but I'll tell you more about that in my next post]
Paul was personally picked by Walt Disney himself
to fill the role of Mickey!
Walt knew of Paul's Costume work through the Ice Shows...
and in 1961, Disneyland was designing
a new float for the parade that was a huge Drum!
Walt wanted a smaller performer to make the drum look Bigger!!
and Paul was cast in a role that would be a dream!

Alma also got in on the act...
When Paul was traveling with Walt,
Alma would fill in for him at the park...
and she also spent 4 years as Pinocchio!
Here's a shot of them, in 1965, for Disneyland's 10th Anniversary
Televised Special

Paul had a lot of incredible moments as Mickey...
among them:
Flying in Walt's personal Jet
to attend the Worlds Fair with Walt,
When Walt was the Grand Marshall of the1966 Rose Parade,
Paul rode in the back seat with him...
Opening Anaheim Stadium with Walt...
just to name a few...
and yep, It's Paul in the last Picture of Walt and Mickey...

Christmas 1976, Disneyland did a Television special
with Art Carney, Sandy Duncan and Glen Campbell,
but the real thrill for Paul was, for the special,
they "Iced Over" Main St. and asked Paul to skate as Mickey!
[This was when Disney had arena shows"Disney On Parade"
but before "Disney On Ice"]
I remember watching Mickey skate down Main St.,
on my TV, and thinking "How Cool!!!"
I don't have a picture of Mickey skating
but here's a picture of the Penguins and Snow People skating... 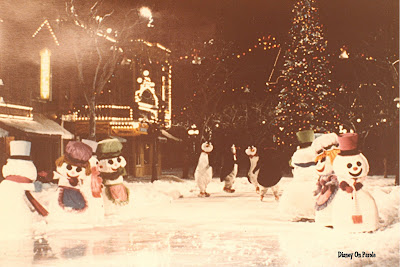 an article on the TV show and SNOW...

In 1980 Mickey got a Star on "Hollywood's Walk of Fame"
and Paul was there!
[That was the first Star given to an Animated character]

I can't begin to imagine how many times Paul lead
the Disneyland Band down Main Street...
a lot of times at the end of the day,
the guys in the band were off work after the parade...
so they would go to Mickey and say
"Let's make this a quick one"...
and you'd be surprised how fast Mickey
could skip with those short little legs!!!

Here's Mickey from the Dumbo Circus Parade 1979
It was this summer that we realized we had the same birthday!

I loved working with Paul,
he just liked to be with the kids,
but when I would come over to Mickey,
He'd give me a playful punch in the arm and shake my hand...
and I would be standing there, Taking pictures,
with the "Real" Mickey Mouse!
Good bye my friend... 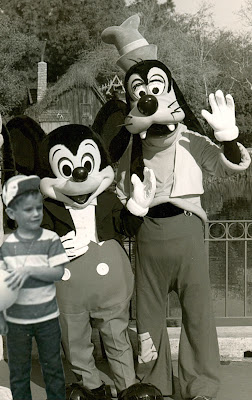