1987
Back when Disneyland went all out for a parade...
sometimes they missed the mark, but
they didn't hold anything back! 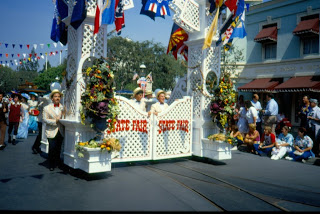 The opening unit was a "push" unit
No motor on this baby! 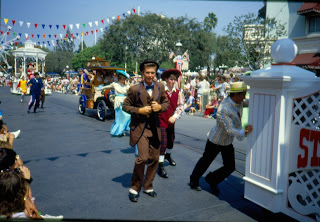 The midway float
with Farris wheel... sitting in the seats ,
they look like 'Whatnots" [background muppetts] 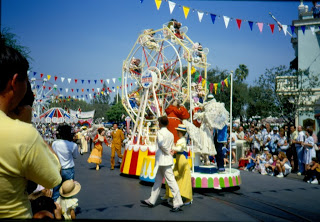 Just in time for the 4th of July!
Love these costumes! 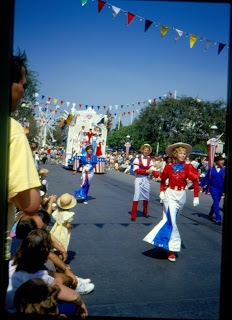 John Deere sponsored tractors for the parade...
They were celebrating their 150th Anniversary
[I loved the pigs hats for this parade] 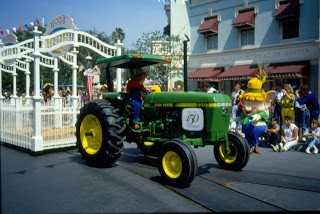 Pluto pulling his sheep down the street...
The Animals that were in the parade,
where all the blue ribbon winners from
all the County Fairs in California. 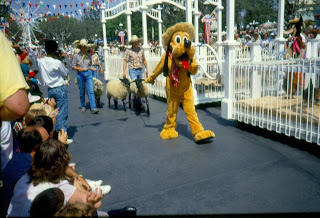 and Donald gets a lift! 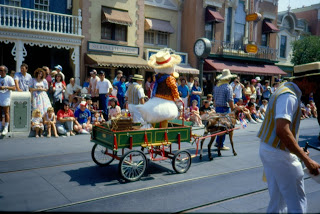 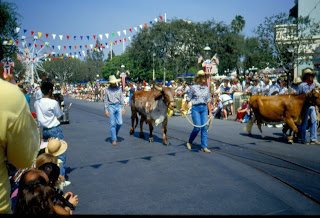 The Clean up... making the street smell fresh again! 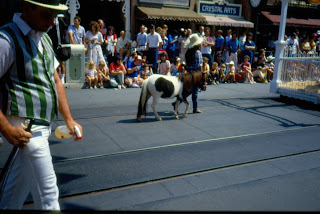 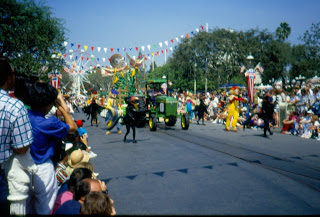 And what Parade would be complete without Dancing Veggies!!!
[in the background you'll see Dumbo's Firehouse float
Painted red and used in this parade as a barn with Clara Cluck in the top of it] 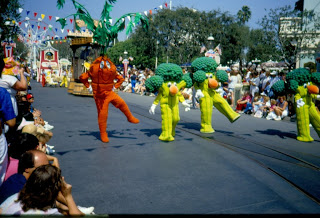 Next post... Shots of how they "Dressed the Park" Yikes!
Posted by Disney On Parole at 10:32 PM

Wow, a parade with Clara Cluck! Any close-ups of her, by chance? I love the DL parades, but this is one that I was never able to see. It looks like it had a little bit of everything (Ferris wheels and tractors....must have been where they got the idea for DCA!) Thanks for posting these!

What a great event!

I remember seeing a little bit about a parade for Mickey Mouse's 60th Birthday that featured lots of mouse characters (exclusive to Disneyland, and I think most of the mice were created just for the parade). Gotta love these special presentations!

Wow...!!! My partner happened upon this site's link while looking at Disney memorabilia. While listing the names of various parades you had posted photos from, I made him stop at "State Fair" and rushed over to the computer.

Sure enough, I'm the "Turn of the Century Kid" in the far left corner of the first photo, and dead center in the second! "State Fair" is the only parade I did that I don't have any photos from. I was also in the Christmas parade the previous year, the Snow White 50th Anniversary parade, and I played Peter Pan in the '87 Electrical Parade.

Thank you so much for posting these. What a treat!

I was the dancing carrot.

I was the dancing carrot.